Most dog-walkers respect wildlife and comply with the signage at the RSPB's Tetney Marshes reserve near Grimsby in North East Lincolnshire.

Their owners mean no harm, but dogs running free on the saltmarsh have a potentially devastating impact on fragile wildlife, especially breeding redshanks, skylarks, meadow pipits and other ground-nesting species.

Other birds are deterred even from attempting to breed.

So the RSPB is again pleading with pet-owners to keep their animals on leads so that these much-loved birds are not lost from this part of eastern England landscape. 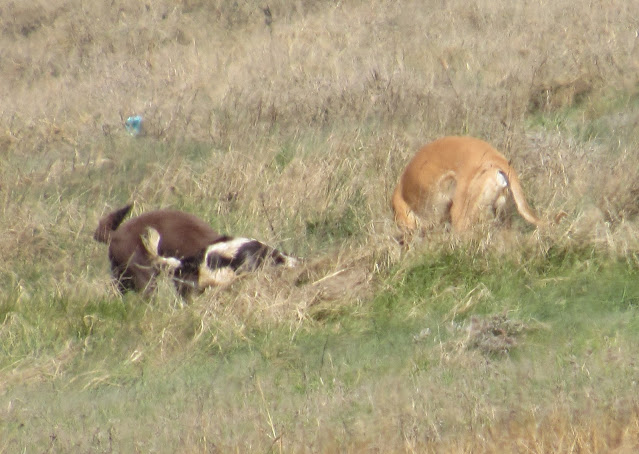 BIRD MIGRATION: INSIDE EACH MYSTERY, THERE IS ALWAYS A NEW ONE WAITING TO BE FOUND 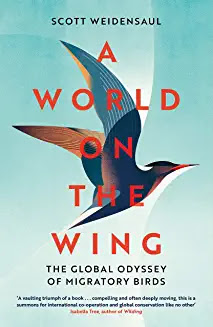 SUCH is the ever-quickening decline in bird populations that  their  migration is now "a shadow of what it once was".
So writes American birder Scott Weidensaul in his important new book, A World on The Wing - The Global Odyssey of Migratory Birds.
But he quickly adds: "That shadow is still mighty enough to leave us slack-jawed and awestruck."
"Awestruck"? The same could definitely be said of Weidensaul's book. It is an endlessly captivating study of both what we know - or think we know - about avian passage and how, thanks to technology and the dedication of birders like him, we are steadily making crucial new discoveries.
Among the fascinating sections is one on a New World species, the Kirtland warbler, which migrates from a small corner of Michigan where it breeds to a couple of islands in the Bahamas where it spends winter.
Attaching tiny transmitters, weighing a fraction of a gram, to certain individuals, it has proved possible both to track their passage and to identify what is their most precious food.
To his credit, Weidensaul joined researchers in the field, even at the cost of enduring fierce sunshine and of being bitten to pieces by  mosquitoes and other insects.
The information  has provided invaluable in stimulating habitat-creation projects which have brought this delightful warbler back from the brink extinction.
Moving to  the Old World, the author is very strong in his assessment of how drought in the savannahs of the Sahel, on the southern fringes of the Sahara, have created an insect apocalypse to the detriment of cuckoos, bee-eaters, shrikes and warblers that winter there before migrating to Europe.
If they are not getting enough to eat, the chances of these calorie-starved birds completing the long  journey ahead is greatly reduced - as are their chances of breeding if they ever get to arrive.
Weidensaul is also red-hot on the migration of shorebirds such as semipalmated sandpiper, whimbrel and bar-tailed godwit.
And he makes a point of contributing his own expression of concern about how  "agricultural intensification has crowded out Nature in favour of chemically-soaked crop monocultures".
Says he: "The evidence is mounting that the very foundations of  the planet's ecosystems are crumbling."
He also highlights the problems of persecution  -  songbird slaughter in the Mediterranean and shorebird hunting in the Caribbean  islands where, in Barbados some 34,000 waders -  about 19,000 of them lesser yellowlegs - are shot every year.
But there are also positives. For instance, the author highlights the promise of creating "pop-up wetlands" whereby farmers can be induced, out-of-season,  to create temporary stop-off habitat for migrating waterfowl.
It should be said that, though rich in research detail, A World on The Wing, is not stuffy or overly academic. The narrative is pacey, vibrant and never less than entertaining.
There is something quaintly touching about how Weidensaul describes his peck-every-three-seconds observations of a palm warbler, speculating what might happen if, through lack of food, this rate increased to a peck every four seconds.
"Sounds like a minor difference, but that's a 25 per cent decrease in what the warbler can consume over the course of a full day - an enormous deficit."
And that deficit in calories and energy, he deduces, could have serious consequences.
"On such razor-thin energetic margins does success or failure  hinge for a migratory bird."
* A World on The Wing is published in the UK by Picador at £20 and available wherever books are sold.
Posted by The Wryneck at 09:42 No comments:

IN the wake of the sad death of Prince Philip, Duke of Edinburgh, birders have been snapping up copies of one of his books.

The purpose of the first trip had been to visit some of the island communities and outposts of the Commonwealth.

From Kenya the Royal yacht sailed to the Seychelles, then  to Ceylon (now Sri Lanka), Malay (Malaysia), Papua New Guinea, Darwin, Alice Springs and finally to Melbourne where he opened the Olympic Games.

After the Olympics, the expedition continued from New Zealand to Chatham Island taking in a number of isolated islands in the South Atlantic including South Georgia, Gough Island, Tristan da Cunha, and ending at St Helena.

On the second voyage in 1959 the yacht set sail from Singapore, then on, via the Straits of Malacca to Sandakan, Hong Kong, Malaita Island, Vaitupur, Christmas Island, and through the Panama Canal before arriving in Bermuda to celebrate the 350th anniversary of the island being a colony of the Crown.

In the gardens of various government houses, he was enthralled by the range of birds, many of them highly colourful.

During one particular stop-off, he invited the US ambassador, who was also a birder, aboard the yacht.

As they were scanning the sea looking for birds, the ambassador is said to have commented  to the Prince that there seemed to be a remarkable "lack of ornithological activity" that day.

Prince Philip's response was typically forthright: "You mean there are no bloody birds!"

The book was published in the USA (by Harper Row) with a different cover picture and  under a different title, Seabirds in Southern Waters.

Copies of both titles have been selling briskly on online sites such as Amazon and Abebooks.

As well as writing the text, Prince Philip supplied most of the  photographs, taken in black-and-white film either on a Minox miniature camera or on a Hasselblad camera that he had bought in 1956 in Stockholm while in the Swedish capital for the Equestrian Olympics.

The maps and delightful  artwork of the birds are by Commander A M Hughes who subsequently supplied the illustrations for another book, Birds of Burma, written by B.E. Smythies.

It was those two journeys aboard Britannia that sparked the Prince's interest in both ornithology and conservation where, previously, his avian interest had largely been confined to shooting gamebirds.

He became the first member of the Royal Family to cross the Antarctic circle, which entitled him to join the Order of the Red Nose, an exclusive group open only to members who have completed the journey.

To commemorate the event, the artist, Edward Seago, who accompanied the Prince for part of the tour designed a lino-cut certificate, featuring an image of him sporting a red nose with a penguin and seal looking on.

He also held the position of president of the World Wildlife Fund (WWF), now the World Wide Fund for Nature, from 1981 to 1996. 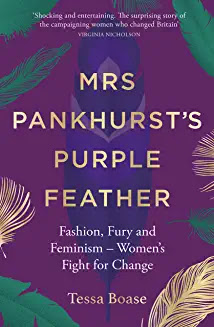 A BOOK that focuses on the iniquities of the once-flourishing plumage trade is to be re-published in paperback in summer.

The book,  Fashion, Fury and Feminism ⁠- Women’s Fight for Change, was published in hardback two years ago.

In it, Sussex-based author Tessa Boase explores the role of the campaign to halt the killing of birds which had been carried out so that their feathers - and sometimes their whole corpses - could be used to adorn women's hats.

The hardback book earned critical acclaim, though its title and cover illustration leave a little to be desired.

For the paperback version, due out on June 1, it has a more impressive cover and a snappier title: Etta Lemon - The Woman Who Saved the Birds. 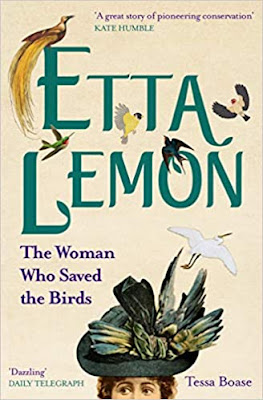 Covid restrictions permitting, the author  is due to give talks to the following organisations during the course of this year:

* Scroll back to see the interview with the author that appeared in the May 27, 2019 edition of this blog. 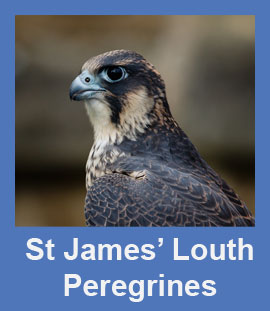 FASCINATING live footage of a nesting  pair of peregrine falcons is being beamed from high up on St James' Church in Louth, near Grimsby in Lincolnshire.
Thanks to co-operation between the church and Lincolnshire Bird Club, cameras are watching the birds 24 hours a day as they set about raising a family.
On Saturday, a fourth egg was laid, and these are now being incubated, with the first chicks expected to emerge in mid-April or soon thereafter.
The birds can be watched online at Lincolnshire Bird Club - Home (lincsbirdclub.co.uk) 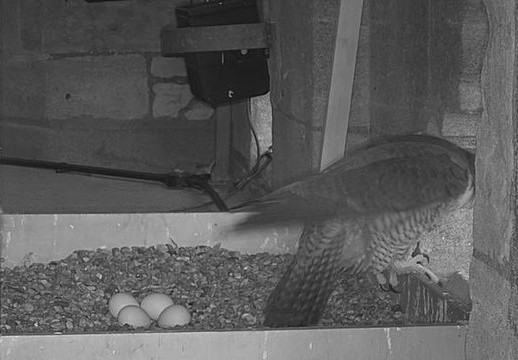 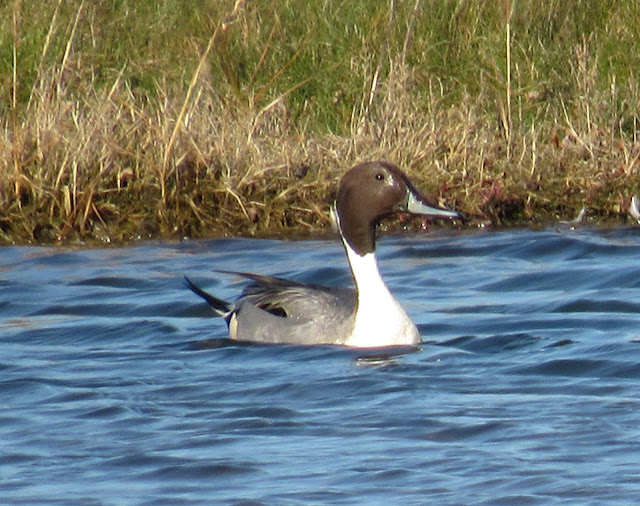 Although not classified as a rarity, the pintail is a long-necked species of duck seldom seen in North East Lincolnshire. This attractive drake was  attracting plenty of admirers when it spent this afternoon  on the water at saline pools located at Humberston  near Cleethorpes.

THE RSPB is poised to announce proposals to set up cafes at three of its reserves - those at its HQ at Sandy in Bedfordshire, at Frampton Marsh in Lincolnshire and at the Dee Estuary in Cheshire.

It is understood the charity will tap the banks to borrow money for the initiative.

The 50-cover cafes will be of similar pre-fabricated modular construction and should pay for themselves in short time if they prove to be as popular expected.

They will also each provide employment for a catering manager and assistants.

Planning applications will be submitted with the sites' respective local councils in the next few weeks.

Meanwhile, in North Wales, RSPB Conwy, which already has a cafe, is in line to have a replacement or enlarged facility.

The RSPB hopes that two of the new cafes will be up and serving by Christmas, with the other two by Easter next year.